Angela has been active in S.D. local foods for over ten years as an educator and a producer.

Angela has been active in South Dakota local foods for over ten years, both as an educator and a producer. Since 2006, she has been the owner/operator of PrairieSun Organic Farm and Poultry, a small-scale family farm located in Clay County in southeast South Dakota. PrairieSun is certified organic by MOSA, for the USDA. They raise Dexter cows for milk and meat, row crops, vegetables, laying hens for eggs, and broiler chickens for meat, and process all their chickens on site.

Angela moved to South Dakota in 2000 from California and saw comparatively limited access to local, organic, and natural foods. So she decided to start growing it herself. Before too long, Hy-Vee became the first customer for her products. 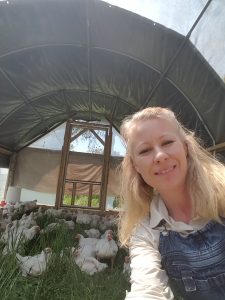 PrairieSun is certified organic by MOSA, producing milk and beef, row crops, vegetables, eggs, & poultry. They process all their chickens on site.

“It was then that I started to think of farming and food production as a job,” Jackson said.

Farming issues like drought and supply chain issues created challenges for Jackson and PrairieSun Organics, but over the years they steadily expanded the operation, adding equipment, and opening their own on site processing plant. The farm became a self sustaining operation until 2017, when pesticide drift occurred, and the farm lost everything.

But Jackson is not afraid of starting from square one. She has slowly rebuilt her operation, and this year, could not keep up with the demand for poultry. That is one of the many goals Angela has for her involvement with the South Dakota Specialty Producers Association Board of Directors.

Jackson is the owner/operator of PrairieSun Organic Farm and Poultry, a small-scale family farm located in Clay County, South Dakota.

“There are major local food supply chain issues in South Dakota that we really have to get to work on,” Jackson said.

A longtime member of SPA, she plans to help build processing infrastructure statewide. Jackson will also bring her passion to helping SPA members receive access to grant funding, education and support, and advocacy.

“There is the demand, there is opportunity. We need the systems,” Jackson said. ”Farming is hard work, dedication, blood, sweat, and tears. People doing startup operations need to be getting help every step of the way.”

And the South Dakota Specialty Producers Association is happy that Angela is here to help us provide that support!