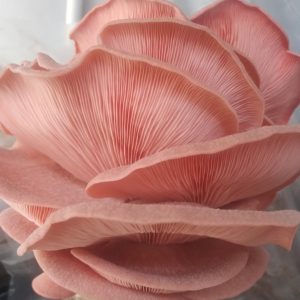 Dakota Mushrooms in Sioux Falls used to be the only mushroom grower in South Dakota, but not anymore. As of summer 2019, two new producers are in the Black Hills: Alan Carner (Black Hills Mushrooms, Rapid City) and Jackson Young (Young Mushrooms, Spearfish). When asked what possessed them to begin producing mushrooms, Alan said it was because there was a lack of locally grown, fresh mushrooms year round. For Jackson, who is a fan of cooking, it was the quest for new and exciting flavors and the ones at the store just wouldn’t cut it. 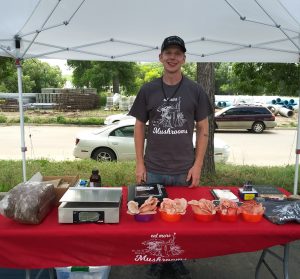 Both producers are starting small. Alan started growing mushrooms about three years ago, and Black Hills Mushrooms began in the spring of 2018. The production area is always growing in size to meet demand. Jackson started growing mushrooms five years ago. In the beginning he grew mushrooms in mason jars using Rubbermaid totes as the fruiting chamber. Since then, it has evolved into a 400 square foot high intensity urban farming project.

How do you grow mushrooms? According to Alan, there is a lot of misinformation currently out there in regard to growing mushrooms he hopes to change. Jackson continues, “To ensure quality, most of the process is done under laboratory conditions. First, the desired mushroom spawn is introduced into sterilized sawdust. After the mycelium has colonized the sawdust over a period of 3 –12 weeks, (depending on the strain), the grower introduces fruiting conditions. From there it takes 10-14 days to havest for most species.” 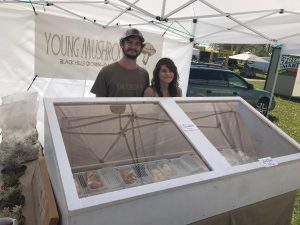 Both Alan and Jackson can be found at the Black Hills Farmers Market. To date that is where Alan sells the most mushrooms. Jackson’s biggest customers so far are Tally’s Silverspoon and the Deadwood Social Club. Jackson wants to establish more connections with local chefs. “It’s a slow process because most restaurants don’t feature mushroom dishes. I think it’s because they didn’t have access to a reliable quality product.”

Both producers encourage everyone to give their mushrooms a try. They know the diverse flavors and textures of the Lion’s Mane, Grey and Pink Oyster, Chestnut, and Shitake mushrooms will keep you coming back for more. To learn more, checkout their Facebook pages at Black Hills Mushrooms and Young Mushrooms. Be sure to try this Sautéed Oyster Mushrooms Recipe!

Best of luck to Alan and Jackson. We look forward to watching you grow! 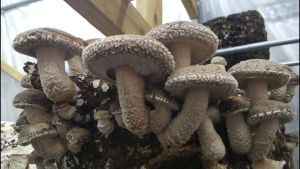